There are words that reverberate in me. There are images, nouns, that return and remain. Sod and canola and saskatoon can sum up the bulk of my preoccupations in conspicuously complete ways. Could nearly sum me up as a person. They stitch together the backdrop of most of my thinking. They shape and trouble most of my ideas about the world. Some part of me is attuned to them, always. 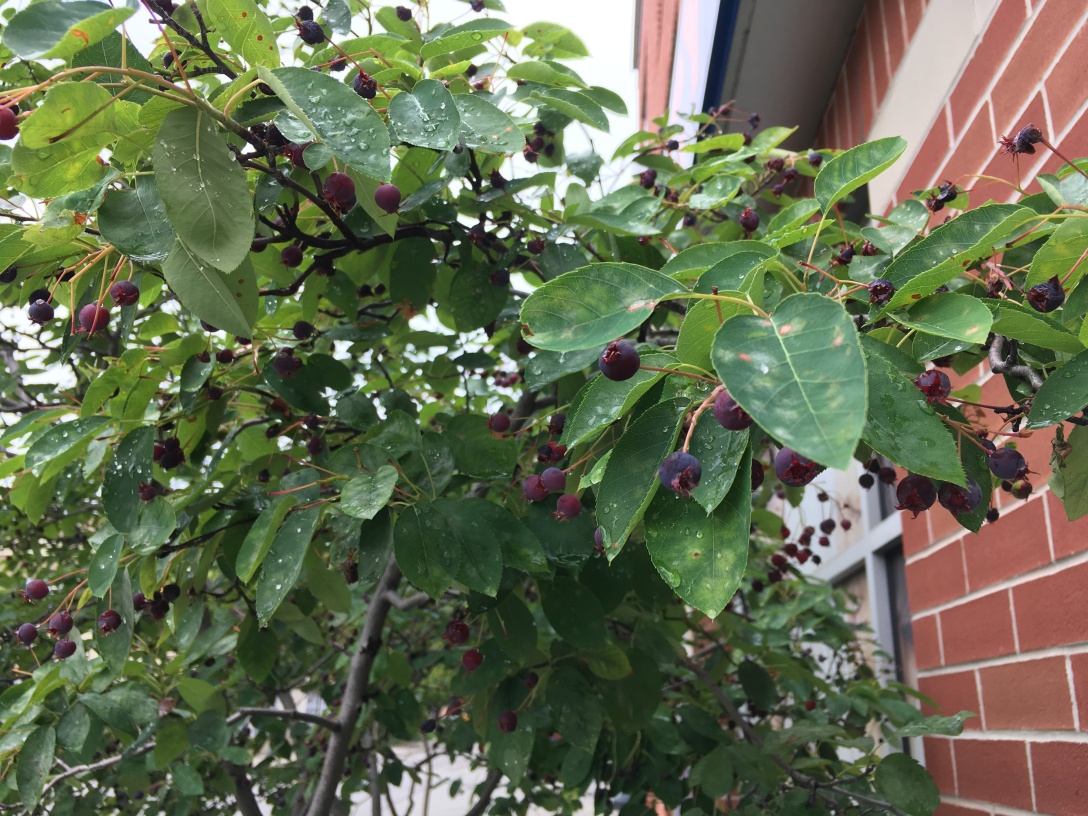 I’ve been foraging saskatoons from two bushes growing in a bed on a corner in downtown Kitchener. Just me and the birds. The season’s nearly over for this pair of bushes, accelerated by unfiltered south-eastern exposure and heat reflecting off the concrete and brick that surrounds them. I said goodbye to them yesterday, in fact. Picked some last stragglers and thanked them. All the rain we’ve received this spring and summer made the berries plump and thick on the branch. It took no time to fill a small pail. I thought about the picking parties my family would have when I was quite young, and how there’s always other life wanting to pick berries with you, which can get dicey, depending on where you are. Downtown it was sparrows and chickadees, and we got along fine. They could reach the top branches and I couldn’t.

Few people in Ontario seem to know these berries. The people who passed me on the sidewalk and saw me picking could not conceal their surprise, their confusion, their wariness, their alarm. I tried to exhibit friendliness, normalcy: your neighbourhood saskatoon ambassador, picking and eating berries with strangers, sharing the name I call the berries and how I came to know them, how loved they are in the west. I just assumed they were poisonous, said one woman. A man of about twenty-five made his kids walk on the other side of him as they passed me. A girl of about four asked in a loud voice, What is she DOING? One guy half-glimpsed the small bucket I was holding and assumed I was spraying for insects. That’s the likelier scenario for some: she must be out there trying to eradicate something. There are some who perceive that as humanity’s only role.

Outside my old rented townhouse in London was a row of saskatoon bushes and lilacs some twenty-five feet high. We got new landlords who thought the bushes were making a mess, who thought they were mess, and decided they’d cut them down. I tried my ambassadorial number on them: we picked and ate berries together, I told them how incredulous my family, and prairie people in general, would be at the sight of these bushes, I put forth the case that the bushes were simply in need of a healthy pruning. None of it worked. They brought in a machine and ripped out the bushes and replaced them with dyed mulch and hostas that cooked in the full sun within days of being planted. And they did the same to the cedars, and the pines, and the Virginia creeper, and the beds of bulbs that had been planted so there’d be something sprouting and flowering all summer. They felt compelled to void out anything green and living. They took it as their primary role. 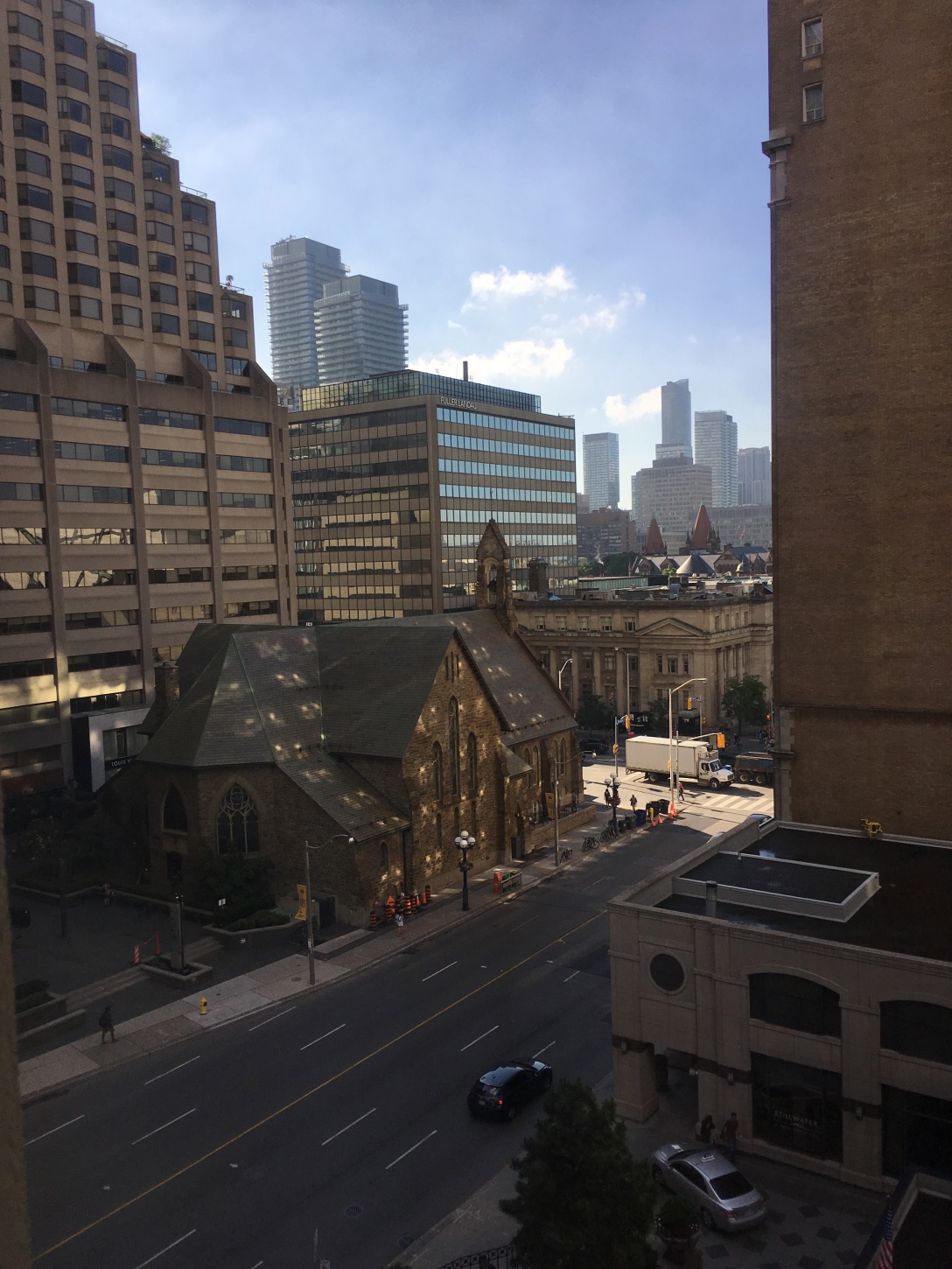 I was just in Toronto for the Trillium Awards, where I was put up in the Park Hyatt, the most expensive hotel I’ve ever stayed in. They brought bacon and eggs and coffee right to the door of my room. They gave me a bathrobe and a king-sized bed. On the way to the reading on the first night, walking down Bloor Street through Yorkville, I paid a visit to Darcy Cardinal’s / Al Sheppard’s ghost bike, which is mere feet away from the hotel. I took a moment to pay my respects to my old schoolmate, who appears in the book for which I had been nominated, and to apologize to him for staying in the hotel to which Michael Bryant escaped after he ran Darcy down. That’s the terminology Darcy’s father very deliberately used in an interview: Bryant ran down his son. And I realized that this was, in one way, the closest my home was to me, standing in front of this ghost bike in one of Toronto’s richest neighbourhoods. I had the feeling, staying in that hotel, that I was put on the side of the enemy for two nights. And that enemy’s way of life could use some dismantling, but that’s not happening, of course. Instead, the opposite is happening—Toronto is, if anything, getting tonier, more exclusionary—and, as tends to happen with people in possession of monstrous wealth and privilege, they just want the unseemly things, the unknown or uncomfortable things, gone, eradicated, banished.

Sod, canola, saskatoon. Two of these things that so constantly embody my thinking and writing and being are used as a way to cover over what’s there, what’s growing. They are used to exact one’s wishes on a place. And the saskatoons I’ve been picking have been domesticated and planted in beds on a downtown corner; a similar control, or possibility of control, is presumed. These three words that repeat through me bring out a grief and a love that I need to be vigilant about. There are reasons why they keep appearing in the things I write, and one of my jobs is to remain alive to those reasons. 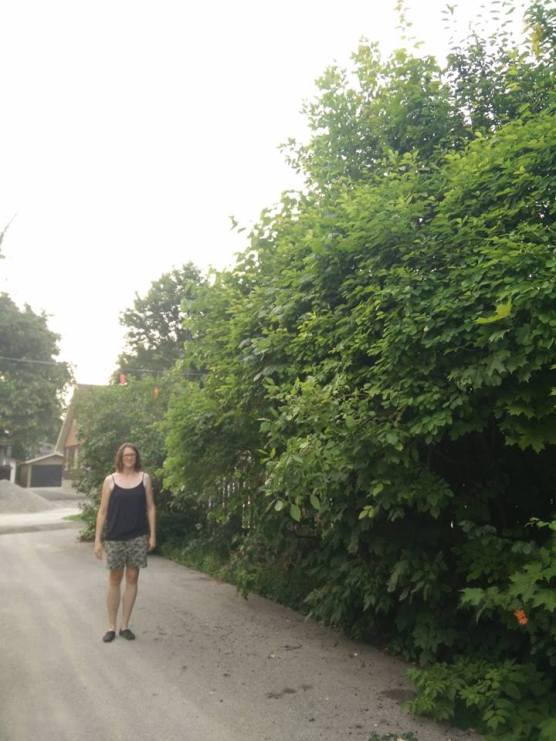 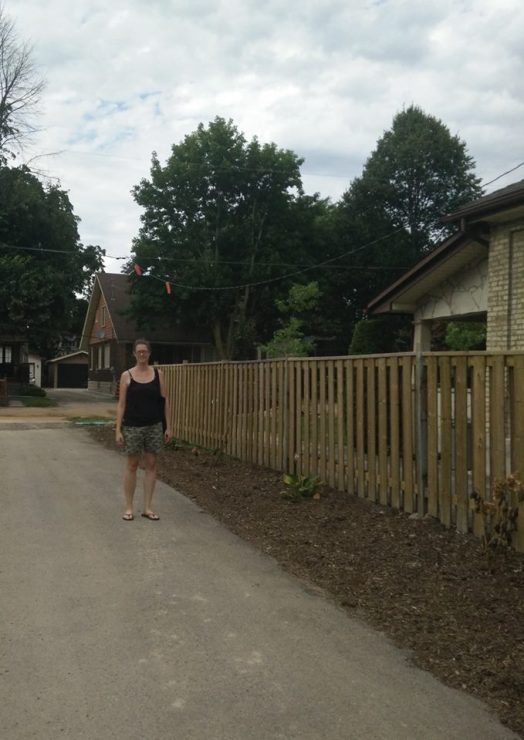 One thought on “On saskatoons and the Park Hyatt”

Leave a Reply to Your Auntie - Heather Cancel reply